Four students and two professors left for Brazil on February 16th, 2017.  Four students and two professors returned from Brazil on February 28th, but we returned different from when we left.  When you travel and experience new cultures, you live a bit of your self behind and take a bit of the culture with you.  The experiences, the people you meet, the food you eat, change you.  This trip truly was a life-changing experience.  The four students who went on this trip want to tell you how they are changed and what they learned!

A few days ago, someone asked me how God was speaking to me this trip. I was taken aback. My initial thought was that to be spoken to by God requires some huge service to others or some great realization of His call for what career to pursue. I gave what I thought was a weak answer, meaning it didn’t measure up to what I thought people should take away from trips like this. I said, “He’s letting me fall in love with His creation.” I didn’t grasp the gravity of this statement until I was trekking through the Atlantic Rainforest with pouring rain purifying my face. Experiencing God’s creation in another region has given me insight into His character. When Professor Waverly brought us to the Atlantic Rainforest, she pointed out trees with moss growing on them and emphasized that this was not a parasitic relationship. Many things, including other species of plants and frogs that lay eggs in these plants, thrive alongside trees as they all reach for the sun. Later on the adventure, she pointed out a tree that had died quite some time ago, but was still erect. She explained that often the trees are decomposed before they fall down so that when they fall, they immediately (in less than six months time) disintegrate. In this way, fertility is not found in the soil, but in each member of the environment. If soil were taken from the forest to make fertile land for farming, the attempt would be in vain. Each and every component is in existence for the vitality of the population. What an incredible analogy to humankind in Brazil; we are not made to live alone and compete for success, but to live in company with others to thrive as a generation. If God created animals and vegetation of His forests to behave in such a positive manner, can we assume it is His desire for His human creation made in His image to live in a similar manner? We apply His fundamental principles of loving one another and treating each other as we would ourselves if we cooperate rather than compete.

Getting to know Brazil as I’ve traveled on these past two trips has been such a privilege. I’m ashamed to admit that before I first left, the only thing I knew about Brazil was that the “Jesus statue” resided in its coastal city of Rio and that a large portion of its land is covered by the Amazon Rainforest. As I was preparing to go on this second trip and explaining that I would be spending my February break in Brazil, so many people asked me what I’d be doing on my “missions trip”. My heart hurt every time someone made the assumption, but I totally understood because before I traveled to Brazil, I really only knew of Brazil as a “developing country”. I’ve learned many things as I’ve traveled, but perhaps the most important thing I’ve learned is that there is so much about the world that I don’t know! Brazil isn’t just a poor developing country, it’s a place with vibrant culture, beautiful art, delicious food, friendly, insightful people, immense cities, and a diversity of landscapes and heritages. It’s home to the third largest city in the world and is a melting pot of people of Native Brazilian, Portuguese, Lebanese, Japanese, African, and Italian heritage among many others.  I’m sad to think that I was so ignorant to such a fascinating and beautiful country and know that with two short trips, I’ve only begun to scratch the surface of Brazil’s history and culture. Now, I am all the more eager to travel and learn about the multitude of countries that I know so little about as I seek to come to know and understand the beautiful and diverse world that God has created.

To be completely honest, the thing I was most looking forward to in Brazil was the food. Kirsten filled me in on all of the different kinds of fresh fruits and meats and pastries that she had tried last time, and I was more than ready to try them. I was also excited for the 80 degree weather in February, the opportunity to learn Portuguese, and the chance to see actual South American rain forests and waterfalls. One thing I hadn’t given much thought to – and if I had, it was with a bit of trepidation – was the fact that we would be split up and staying with host families. I’m not particularly extroverted, especially with strangers. Add a language barrier into the mix and it was looking like a big awkward mess. However, I was very surprised to realize a few days into the week that my favorite part of the day was rapidly becoming the drive back to the apartment Stephanie and I were staying in. My host family technically consisted of a young woman who worked at the university and her husband, but it really included their parents, siblings, in-laws, cousins, nephews, niece, and three neighbors, all of whom lived close by and joined us for dinner almost every night. There were only two in the mix who spoke English, but that only made the conversations more entertaining as we attempted to use gestures and Google translate to understand each other. It wasn’t long before I was playing a soccer video game with a 6 year-old boy who could only point to my controller to show me what to do, nodding along with a 70 year-old man who was enthusiastically showing me his only English music CD, and having my nails painted by a talented neighbor. Stephanie and I even joined in on the building’s Zumba and Water Aerobics classes, dressing up in costumes in honor of Carnaval. I did end up loving the food, the language, and the scenery, but it was the people who welcomed me into their families and community who showed me the real heart of Brazil.

They threw me a surprise party on my birthday!

Throughout our time in Brazil, there was a continuous trend of hospitality and kindness from every person we interacted with. There was not a moment where I felt lost or alone despite being in a foreign country where I could barely say more than “thank you” and “help” in the local tongue. Even when I was separated from the group I traveled with for my job shadow experience, the Brazilian students I met had taken me under their wings and made me one of them. It’s that trait that I want to bring back home with me and show through myself, the neighborliness that extends to strangers upon first meeting. Perhaps it’s already rubbed off on me; I left on this trip with little more than vague familiarity with the other students and return with three new close friends who I was comfortable with to confide in on our last nights in Brazil. It is my hope that I can continue to foster new relationships formed, with those that returned with me as well as those left behind in Brazil, and further push myself out of my comfort zone.

WOW!!!! What deep and beautiful testimonies! Reading you made my heart sing and experience the strong thread of light that connect us all! God bless you all!

Professor Waverli: Thank you! We love seeing what our students take away from international experiences. They had a wonderful experience and learned so much. Thank you for taking the time to share your knowledge and passion with us. We look forward to working with you in the future. I have already told several students who are coming next time that they are going to love Professor Waverli!!

Dear Amy, It was really pleasure to have you here and the blog and reflections posted just show how deep this experience was for all! I’m also longing for the opportunity to work together and I’m sure we will be able to leave good examples of reciprocity, well being, harmony and love! Let’s keep in touch and plan the next steps!

Why do you go away? So that you can come back. So that you can see the place you came from with new eyes and extra colors. -Terry Pratchett   While in Brazil, we (the Read more… 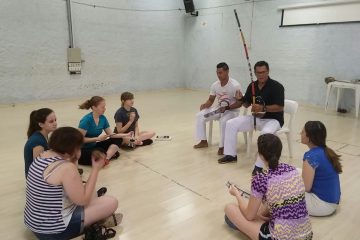